Ophiuchus is in the news again!

I remember this issue from years back. They are saying that Ophiuchus should be treated as a 13th sign again. Someone wrote a book about it a decade ago (Abbamonte??). But Ophiuchus isn’t a sign and it would cause all sorts of problems to make it one.

Personally, I think it’s crazes and fashions like these within western astrology that killed off all the astrology groups in the UK in the 1990s. Astrobabble is the curse of western astrology, as is its tendency to get hi-jacked by certain spiritual systems and also fads: and the craze for fashions undermines it in the long run as well: e.g. asteroids – distracts from the main focus.

Ophiuchus is a constellation a fair bit off the ecliptic (the yearly path of the Sun against the backdrop of stars). It was known to Ptolemy, but it was never a sign – and Ptolemy chose to omit it from the twelve zodiac signs two millennia ago.

Basically the division of the ecliptic into ‘signs’ is obviously man-made and arbitrary. But it has to be done as a basis for conceptualisation and understanding. It’s a question of how do you slice up a cake?

Two zodiacs predominate in this culture: the Sidereal Zodiac of Vedic Astrology and the Tropical Zodiac of western astrology. These are sun-based or solar zodiacs, and the ‘Ayanamsha’ or difference between the two is approx 24 deg and they diverge by a degree more every 72 years.

The Sidereal Zodiac is anchored to a fixed star (Spica at 1 deg sidereal Libra); whereas the tropical zodiac starts wherever the Sun is against the backdrop of stars for the vernal equinox  – and this point is moving each year due to the precession of the equinoxes caused by the wobble in the Earth’s axis of rotation.

For these reasons, I feel it should be said that the sidereal zodiac is orientated to the Divine, to the Eternal, whereas the tropical zodiac, being ‘solar’ or ‘Sun Sign’ astrology, is ‘ego astrology’: its focus largely is egoic.

Obviously our egoic personality is useful and very important to understand and develop right attitude to, but it’s not the ‘whole truth of us’! For this reason, the scope of Vedic Astrology is immensely vaster than egoic western astrology.

Of course, there are not just these two zodiacs. I also use a third – the wonderful, magical and decisively accurate Nakshatras: the 27-sign Lunar Zodiac of Vedic Astrology.

In addition to its 12-sign solar sidereal zodiac, Vedic astrology also employs an even more ancient Lunar zodiac: the immeasurably powerful lunar zodiac of 27 signs, that depicts our realities with huge truth in a magical and dream time way that is pre-solar, pre-logical and pre-linear, and is hugely accurate, powerful and meaningful.

These lunar signs are called ‘Nakshatras’. The Lunar Sign or Nakshatra that your Moon falls in in your Vedic natal chart is the basis for the ancient and powerfully accurate Vedic Astrology of love and relationships. Each Nakshatra has a ‘power animal’. The power animal of the same species but the opposite gender to your own is your ideal sexual partner, however, taking the wider issues of relationship, true overall compatibility is often best with another Lunar Sign.

While we are talking about how to divide up the cake, you might also like to note the Sidereal Symbols. Vedic Astrology also uses a system of Sidereal Symbols: Vedic Sages have channelled the meaning of each of the 360 degrees of the Sidereal Zodiac. The roots of this system lie in ancient Babylonian Star Lore, but the system has been modernised in the last century by Malik Jane. Using the symbol for each zodiacal degree, these sidereal symbols can throw vast illumination onto the nature of any of your planets by using the symbol for the degree the planet falls in. On occasion, the illumination thrown onto the nature of the planet is of vast value and can be found from no other source.

I teach courses in both western and Vedic astrology. I thus see merits in using both systems side by side: see my web site Courses page. I am also offering a workshop on the wisdom of the sidereal symbols: see my web site workshops pages: www.starwheel.co.uk. The unique feature of the workshops is that they fully integrate the demonstration of healing techniques within them, such as Emotion Code, Metamorphic Technique and EFT, as well as visualisation.

Returning to the issue of Ophiuchus, just a couple of footnotes: 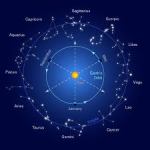 Secondly, the Precession of the Equinoxes: The reason the Western zodiac is even more out of sync with the stars is, as I have said, because of its moving start point: the way tropical 0 deg Aries moves each year against the backdrop of the stars. For this reason, a person who is born on April 1 is an Aries in Western astrology, but is a Pisces in the sidereal zodiac of Vedic Astrology – and the reality is that on April 1, the Sun is actually transiting through the constellation of Pisces in the sky.  Vedic Astrology seeks to maintain a correct correspondence between the zodiac and the constellations, even if it does smooth out the size differences for very valid reasons.

What is the cause of precession? The earth is wobbling as it rotates. This is because the Moon and Sun are constantly pulling on the earth’s equatorial bulge, so the earth wobbles like a top that is slowing down. This wobbling is called precession, and it’s so slow that the earth takes 25,800 years to complete one wobble. For this reason, the position of the sun on the first day of spring (the vernal equinox) slowly drifts around the sky. Five thousand years ago the sun was in Taurus, near the Pleiades star cluster, on the first day of spring. Two thousand years ago, the earth was at the start of Aries. Six Hundred years from now the sun will be in Aquarius on the Vernal equinox. (The “Age of Aquarius,”). The fact of this precession of the Equinoxes was discovered by Greek astronomer Hipparchus in the second century B. C.

So here is my reading of the nature of the Full Moon of 8th December 2022. As

So here is my reading of the nature of the Full Moon of 8th December 2022. As