In this second post, I look at what is revealed by the fact that he has Kal Sarpa Yoga in his Vedic astrology birth chart.

Vedic Astrology is awesomely accurate and sure in its declaration in the hands of a trained astrologer, but I do feel it is actually incomplete unless the psychodynamic astrology of the client is also added in and fully taken into account. Modern westerners are, after all, intensely psychological beings.

It centrally stands out that Donald Trump has Kal Sarpa Yoga in his Vedic birth chart.

In other words, all his Vedic planets are enclosed between the axis of the Nodes of the Moon.

In Vedic Astrology, the North node is called Rahu and the South node is called Ketu, and the position of the Nodes of the Moon in our Vedic birth chart is actually the key to the reading of our incarnational life purpose.

Incidentally, just to say that Donald Trump’s Moon and Sun are technically just a fraction outside the Nodal Axis it would be wrong and legalistic to say he has not got Kal Sarpa Yoga. I have found this this is Kal Sarpa Yoga, and I have found that even where planets are outside but in the same sign as the Nodes, then the Kal Sarpa Yoga effect still shows in their lives. 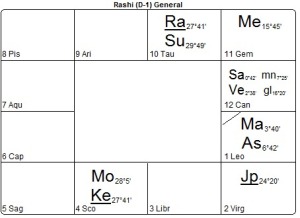 (If you want to see his western astrology, look at my Post No. 1 on Donald Trump’s Astrology)

Above all, the effect of Kal Sarpa yoga can be to make the person divisive.  It can be associated with physical deformity or moral weakness, misfortunes, deceit and treason.

The positive qualities of this Yoga are that, the native can acquire a capacity to do arduous work, with exceptional success.  Moreover one can fulfill his desires of his life, either in the materialistic concept or in the spiritual scope.

But it is noted for its capacity for divisive ranting.

The important thing is that divisiveness in politics never leads to good results. It leads to scapegoating of minorities and ethnic outsiders.

The role of the political leader must ideally be to seek to unite the people in the nation. And to seek to maintain good relations with nations abroad (though not of course with surrender of national autonomy or defence).

If the US is to elect Donald Trump with this Yoga in his Vedic birth chart, it would be something like electing Mussolini. And with possible similar consequences.

Since the Nodes of the Moon are associated with Karmic attributes, the yoga inflicts certain restrictions over a natal chart. It expresses karmic nemesis.

This does not mean to say that the native cannot work with the divisiveness and poison that is inherent in Kal Sarpa Yoga in their birth chart, but if the needed perception is not gained, and if healing and empowerment work is not done, then we have a nation at war with itself – and others.

A big problem for Kal Sarpa Yoga people is that they are subject to mood-swings and they can be prone to blame other people for this: Projection, denial and scapegoating!
This is because half the month while the Moon is going round the heavens, the Moon is inside the Nodal axis and is experienced as linked to the other planets in the birth chart (some benefic, some malefic).
But the other half of the month the Moon is moving out on a limb. The Moon is unsupported by the planets in the native’s birth chart (all of which are the other side of the natal axis).
An unsupported Moon is not easy for our Minds. People with Moon unsupported in their birth chart experience all sorts of fluctuations of mind.

See details of my highly caring and qualified worldwide readings at: www.starwheelastrology.com I always use astrology to identify the healing and empowerment we need.

PrevPreviousDonald Trump Astrology: from Michael Conneely. Post No. 1 – The Megaphone
NextClearly Identify the danger days for the stability of your mind: AshtakavargaNext

How should we handle a New Moon?

The New Moon phase is an inward-looking introspective time. It represents new beginnings that will unfold as

How should we handle a New Moon?

The New Moon phase is an inward-looking introspective time. It represents new beginnings that will unfold as